Mignon L. Clyburn became the first woman head of the Federal Communications Commission (FCC) when she was appointed Acting Chair by President Barack Obama in May 2013. She was also the first African American woman nominated to the commission. She served on the FCC for nearly nine years.

From July 2009 until June 2018, Commissioner Clyburn was committed to narrowing persistent digital, communication, and opportunity divides that challenge rural, Native, African American, Latino and low wealth communities. Specifically, she pushed for the modernization of the agency’s Lifeline Program, which helps defray the cost of voice and broadband services for low-income consumers, championed diversity in media ownership, initiated reforms in the egregious Inmate Calling Services regime, emphasized diversity and inclusion in STEM opportunities, and was a strong advocate for preserving a free and open internet, or net neutrality.

Previously, Clyburn served 11 years on the South Carolina Public Service Commission, including two as its chair. For 14 years, she was the publisher and general manager of the Coastal Times, a family founded, Charleston-based weekly newspaper that focuses on issues affecting the African American community.

Clyburn most recently held a fellowship at the Open Society Foundation where she continued the push for the elimination of predatory rates for prison telephone services. She is currently the principal at MLC Strategies, LLC.

For well over two decades, Clyburn has been actively involved in a myriad of community organizations. Prior to her appointment at the FCC, Clyburn served on the South Carolina State Energy Advisory Council, the Trident Technical College Foundation, the South Carolina Cancer Center Board, the Columbia College Board of Visitors, the Palmetto Project Board (as secretary/ treasurer), chair of the YWCA of Greater Charleston and on the boards of Reid House of Christian Service, Edventure Children’s Museum, Trident Urban League, and the Trident United Way. She also is a Life Member of the NAACP, a member of The Links, Inc. and the SC Advisory Council of the U.S. Commission on Civil Rights, and was past president of the Charleston County Democratic Women and Black Women Entrepreneurs.

Clyburn graduated from W.J. Keenan High School in Columbia and holds a B.S. in banking, finance, and economics from the University of South Carolina. She is the oldest daughter of James and Emily England Clyburn. 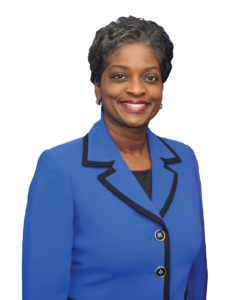