George Rogers, a native of Duluth, Ga., has always had a love for football. A standout at Duluth High School, Rogers decided to attend the University of South Carolina when coach Jim Carlen told him that he could play in his freshman year.

Rogers rushed for 623 yards as a freshman and then tallied 1,006 yards as a sophomore while splitting time with Johnnie Wright. However, Rogers’ junior season launched him into the national spotlight. He finished with 1,681 yards and eight touchdowns to earn All-American honors.

During his senior year, Rogers led the nation in rushing with 1,781 yards while scoring 14 touchdowns and unanimously earning All-American honors. In December 1980, Rogers bested University of Pittsburgh defensive lineman Hugh Green and University of Georgia running back Herschel Walker to win the Heisman trophy. Rogers is the first and only college football athlete in the state of South Carolina to win the Heisman.

Selected as the first overall pick in the National Football League (NFL) draft by the New Orleans Saints in 1981, Rogers spent seven seasons in the NFL. He rushed for 1,674 yards as a rookie, which ranks second all-time to Eric Dickerson on the single-season, rookie rushing yards record. Rogers played four seasons with the New Orleans Saints and three with the Washington Redskins, where he won a Super Bowl title in 1987. Rogers retired after the 1987 season and finished his NFL career with 7,176 rushing yards and 54 touchdowns.

Rogers is the first in his immediate family to attend and graduate from college. He created an endowment to the University of South Carolina, and as a way of paying it forward, started the George Rogers Foundation of the Carolinas, Inc., in 1991. The foundation provides financial assistance to first-generation college students and supports community-based youth development, non-profit organizations. His foundation made a $75,000 commitment to the University of South Carolina Student Athlete Promise Fund, which helps former student-athletes return to complete their degrees. 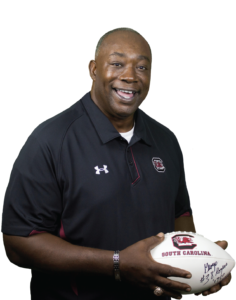