Rear Admiral Reubin B. Bookert is a native of Columbia, S.C. He graduated from C.A. Johnson High School in 1968 and North Carolina A&T State University with a B.S. degree. He also earned degrees in National Security and Strategic Studies from the Naval War College and a M.S. in Management from Salve Regina University in Newport, R.I. He commissioned in to the United States Navy in February of 1975.

In 2004 Bookert assumed duties as Commander of Amphibious Group Two in Norfolk, VA. He commanded all Amphibious Forces on the East Coast. His command included 27 warships, 38 shore commands and 15,000 sailors and Marines. He has been awarded numerous decorations, including three Legion of Merit Medals, the Defense Meritorious Service Medal, three Meritorious Service Medals, the Navy Expeditionary Medal, the Global War on Terrorism Medal, and the Humanitarian Service Medal among others. His last assignment was serving as the Commander of Maritime Forces, which consisted of 45 multinational warships that provided relief for the victims of Hurricane Katrina in New Orleans, La.

He served on the Board of Directors for the Tidewater Virginia Area Urban League. He is a member of Richland School District One Hall of Fame, the Alpha Phi Alpha Fraternity, Inc., and the Spann Watson Chapter of Tuskegee Airmen, Inc. He retired from the Navy in 2006.

Admiral Bookert and his wife Marvis reside in Blythewood, S.C. They have two sons, Brian and Russell (wife, Samantha) and a granddaughter, Hannah. He is currently employed by the Department of Veterans Affairs as the Chief of Support Services in the Columbia Regional office. 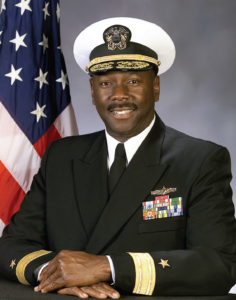