For four generations, the Taylor Brothers Construction Company, Inc. has operated an African American owned heavy construction business in Columbia, S.C. Started in the late 1930s by Samuel Thomas “Papa” Taylor, and aided by a mule and a drag pan, the company prepared commercial and residential sites and sold wood.

The business expanded during the 1940s into hauling and building material delivery when Papa Taylor’s sons, Robert and Samuel, returned from World War II. Soon Robert and Samuel’s wives, Mary Clarkson “Mae’’ Taylor and Onalee Davis Taylor joined the company as staff in a small office on Gervais Street, in the historic Waverly community. During this period, the Taylors excavated the location for the Bellas-Hess department store in downtown Columbia and prepared the site for one of Columbia’s first shopping centers, Midlands Shopping Center on Two Notch Road. Taylor Brothers also became one of the first minority-owned subcontractors to provide hauling services to a new United States Air Force Base in Horry County.

The family’s high standards and commitment to the community continued in the 1960s when Robert “Butch” Jr. and the late Kenneth Taylor, graduates of Benedict College, became the third generation to join the company. The two were followed by Collier, a Midlands Technical College graduate, and fraternal twins Donald and Ronald in the 1970s, both of whom are Hampton University graduates. As subcontractors, the company specializes in on-site preparation, trucking, hauling, water, sewage, demolition, and recycling work with the SCDOT and other general contractors. The business was incorporated in 1982.

Driven by the desire to improve the quality of life for its community, associates, families, and clients, Taylor Brothers Construction, Inc. has developed a diverse regional portfolio. The company’s projects include basements on Columbia’s Main Street, subdivisions, office parks, places of worship, and the University of South Carolina’s Darla Moore School of Business and School of Law.

As a family and business, Taylor Brothers fosters the development of other minority contractors, faith-based organizations, schools, and community events. These generous efforts have been recognized by the SCDOT and the National Association of Minority Contractors (NAMC), among others. The company’s proud motto is, “We Move the Earth to Build a Better World.’’ 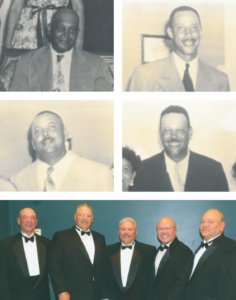